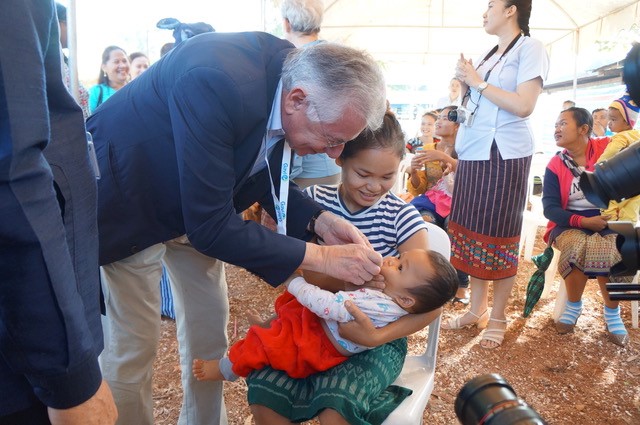 René Karsenti gives an oral vaccine to an infant during a Gavi field visit to the Dongbang Health Centre in Vientiane, Lao PDR in November 2017. Karsenti was IFFIm’s Board chair from 2012-2018.

IFFIm marks its 15th birthday this year, just as the COVID-19 pandemic has renewed focus on the importance of its unique frontloading model.

IFFIm marks its 15th birthday this year, just as the COVID-19 pandemic has renewed focus on the importance of its unique frontloading model.

International financial markets – and the global community at large – have shown a strengthened appreciation for the value IFFIm brings to the countries it serves, the donors that support it and, most importantly, the people whose lives it has helped to save.

IFFIm pioneered “social bonds,” a growing sector in today’s capital markets. Since 2006, IFFIm has harnessed broad international enthusiasm for socially responsible investing (SRI) – both institutional and retail – to bring upwards of US$ 8 billion in funding for Gavi through 39 bond issues in eight currencies. The Gavi efforts that IFFIm funds have dramatically reduced childhood mortality through programmes in lower-income countries, combatting measles and polio, providing pentavalent vaccines, and strengthening country health systems. And recently, Gavi’s work has been central to global efforts to broaden the reach of COVID-19 vaccines and enhancing countries’ capacity to deliver them.

IFFIm provides a unique model for accelerating funding for urgent humanitarian needs. Its vaccine bonds are a win-win-win: children benefit from better health, donors provide greater amounts of funding faster, and investors get a stake in improving world health while seeing a good rate of return.

From supporting childhood vaccination to fighting a pandemic

With initial backing from the United Kingdom and five other nations – France, Italy, Spain, Sweden and Norway – IFFIm raised US$ 1 billion from its first issue in 2006. Four more donors have joined since then – South Africa, the Netherlands, Australia and Brazil.

IFFIm has led innovation in SRI, receiving numerous accolades, including mtn-i’s SRI Innovation of the Decade and Euroweek’s 25 Most Influential Deals. IFFIm’s unique and award-winning Uridashi in Japan and Sukuk issues in Islamic markets earned enthusiastic support from investors and have expanded the impact of SRIs from early “green bonds” focused on climate and the environment to include global health. The “pure play” that its structure represents ensures investors that the capital they allocate to IFFIm bonds is directed exclusively to the humanitarian activities that IFFIm supports.

In recent years, IFFIm has expanded its capabilities in ways that now seem prescient. In summer 2019, months before the COVID-19 pandemic began, Norway chose IFFIm as a vehicle to finance CEPI, the Coalition for Epidemic Preparedness Innovations, for research and development of vaccines against emerging infectious diseases. In spring 2020, IFFIm pivoted quickly in response to the growing pandemic, scaling up to raise immediate funding for CEPI’s COVID-19 vaccine programmes.

In 2021, IFFIm’s US$ 750 million issue, followed by a US$ 250 million bond increase, has provided urgently needed surge funding for the Gavi COVAX AMC’s (Advance Market Commitment) coronavirus vaccine rollout. “The pandemic has hugely reinforced the need to build out IFFIm’s proven model, scale it up and accelerate the pace at which we make it happen,” said IFFIm Board Chair Ken Lay.

9/11 laid the groundwork for innovative finance

IFFIm’s creation story is about timing, creativity and a growing desire around the world to put money to use to raise people out of poverty.

Christopher Egerton-Warburton, one of IFFIm’s original framers, says the idea for the innovative finance mechanism was born 20 years ago. “Gordon Brown gave a speech to the New York Fed a few weeks after 9/11,” Egerton-Warburton recalls. “He talked about how despite recent events, the world could not lose sight of the UN Millennium Development Goals.” Brown had proposed that donors frontload their official development assistance to support those goals. “That speech was the founding concept of IFFIm,” he added.

At the time, Egerton-Warburton covered the UK Treasury for Goldman Sachs. He met with one of Gordon Brown’s Ministers, Baroness Shriti Vadera, who asked him to create a mechanism that would bring forward the value of long-term government pledges, with cash flow only hitting the budget the year pledge payments are made.

Egerton-Warburton and his colleagues rolled up their sleeves and created something truly unique: a financial instrument they called the Innovative Finance Facility (IFF). They presented the idea to the then-Chair of the US Federal Reserve, Alan Greenspan, who asked what the money would be spent on. They needed a social good that would be widely beneficial, cost effective and low risk. Soon after that, Bill Gates met with Brown to discuss long-term money for Gavi’s vaccine programmes, and the relationship with immunisation and innovative finance began. “This crazy series of events is how IFFIm came to be,” said Egerton-Warburton.

IFFIm was founded as a UK charity in June 2006 and issued its inaugural bond on 7 November 2006, immediately raising US$ 1 billion for Gavi. Pope Benedict XVI, Bono and Bob Geldoff were among the first vaccine bond purchasers. “This is the first time that bonds are issued to finance a specific objective related to health and immunisation,” said Alan Gillespie, IFFIm’s first Board Chair, announcing the historic transaction. “We are being given the opportunity to demonstrate a new way of funding international development, addressing the seemingly intractable problems of poor nations with a tried and true financing model from the capital markets.”

“I thought at the time, and I’ve remained convinced ever since, that IFFIm’s capital structure is brilliant. It’s a really efficient use of the public credit of its donors,” said Lay, who was the Treasurer of the World Bank at the time. 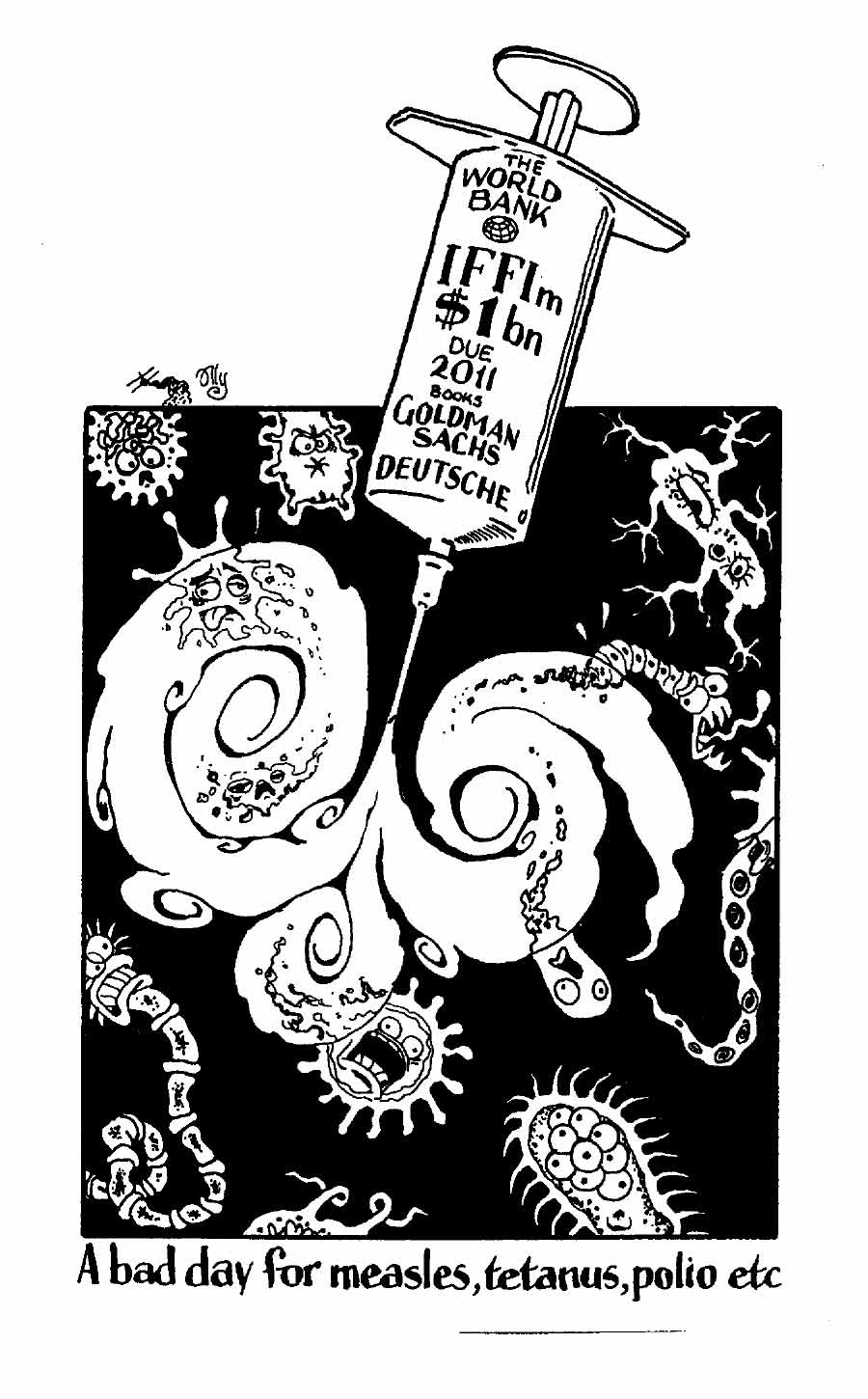 Baroness Sriti Vadera says she is proud of her involvement in creating IFFIm. “Working as part of the UK government, we believed and used the potential of innovative finance to frontload funding for Gavi, which saved more lives than conventional finance over time would have,” she said. “Investing in vaccines has yielded dividends over and over again with millions of healthy children. Vaccine bonds are still saving lives every day.”

“In retrospect, IFFIm’s underlying value proposition seems obvious: If vaccines can get delivered today, it will dramatically reduce the need for poor countries to seek assistance from donors in the future,” said Lay.

What's next for IFFIm? “With vaccines more visible than ever, we can work to develop innovative ways that IFFIm can catalyse an even greater pool of resources,” said Lay. “IFFIm has provided surge funding for this pandemic and will be ready for the next health emergency.”