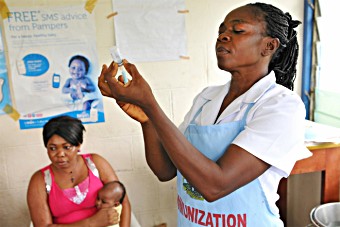 From an acclaimed debut Uridashi to the latest investment by Dai-ichi Life, Japanese investors set a trend for socially responsible investing

Leaders from the global health community are convening this week at the Seventh Tokyo International Conference on African Development (TICAD), where Gavi, the Vaccine Alliance is unveiling its Investment Opportunity detailing the plans for the 2021 to 2025 strategic period.

It’s an apt location for this discussion, because public and private investors in Japan have been among the first and most enthusiastic supporters of immunisation. From Dai-ichi Life’s recent purchase of social bonds to fund the development of new vaccines against deadly diseases, back to the very first household investor to purchase Uridashi vaccine bonds via IFFIm, Japanese investors have led the way funding causes through socially responsible investments, or SRIs, like IFFIm.

IFFIm has inspired the Japanese investor base to become the most enthusiastic supporter of socially responsible investments anywhere.

Immunisation is the world’s most universal, cost-effective health intervention, but there are still diseases for which there is no effective vaccine. Now, with the help of institutional investors like Dai-ichi Life, work to develop those vaccines is underway.

IFFIm’s latest Vaccine Bond issuance in July 2019 raised NOK600 million in immediate funding for the Coalition of Epidemic Preparedness Innovations (CEPI), a public private initiative that accelerates development of vaccines against emerging infectious diseases and enables equitable access to these vaccines during outbreaks. Dai-ichi Life purchased 73% of the issue, becoming its biggest investor and the first institutional investor in vaccine bonds from Japan.

Looking to the future, IFFIm’s support for CEPI will yield dividends in the form of new vaccines for deadly epidemics and diseases.

Long before institutional investors got interested in SRIs, Japanese households had a stake in Gavi’s success from the very first retail issuance, or Uridashi, in 2008. Purchasing vaccine bonds at their local bank branch, mom and pop investors adopted the concept of “investing for good” and helped IFFIm grow as a leader in socially responsible investing.

Uridashi are bonds sold to Japanese household investors. They are denominated in a foreign currency, for example Australian dollars, that can provide investors with a higher rate of return. Retail investors have flocked to socially responsible Uridashi, increasing recognition of SRIs in Asia and throughout the world.

IFFIm’s inaugural Uridashi brought the term “Vaccine Bonds” to public attention. They were first sold by IFFIm to individual investors in 2008 to great acclaim — an early indicator that social bonds were on the rise around the world.

IFFIm’s first Uridashi was also the first issuance to gain traction in Asian markets, making international headlines with a successful retail offering which raised US$ 222.8 million in immediate funding for Gavi’s immunisation programmes. The issuance was so successful, EuroWeek magazine cited the transaction as among the 25 most influential deals, helping set a trend of ethically themed bonds sold in Japan.

“IFFIm has inspired the Japanese investor base to become the most enthusiastic supporter of socially responsible investments anywhere,” EuroWeek’s 25th anniversary edition noted.

A “great story” for investors

IFFIm anticipated this trend, and the concept of Vaccine Bonds as a social value investment took off.

“Individuals, many older women from modest households were interested in what vaccine bonds could do. People could buy bonds at their local bank branch where there were posters of children getting vaccinated hanging on the walls,” said Christopher Egerton-Warburton, Partner, Lions Head Global Partners, and one of IFFIm’s former board members. “Banks started noticing that people wanted this story.”

The Uridashi success illustrates the power of a great story to compel people to invest. These Vaccine Bonds were appealing not just because of their stable rate of return, but also because they gave investors a direct way to impact global health: saving children’s lives.