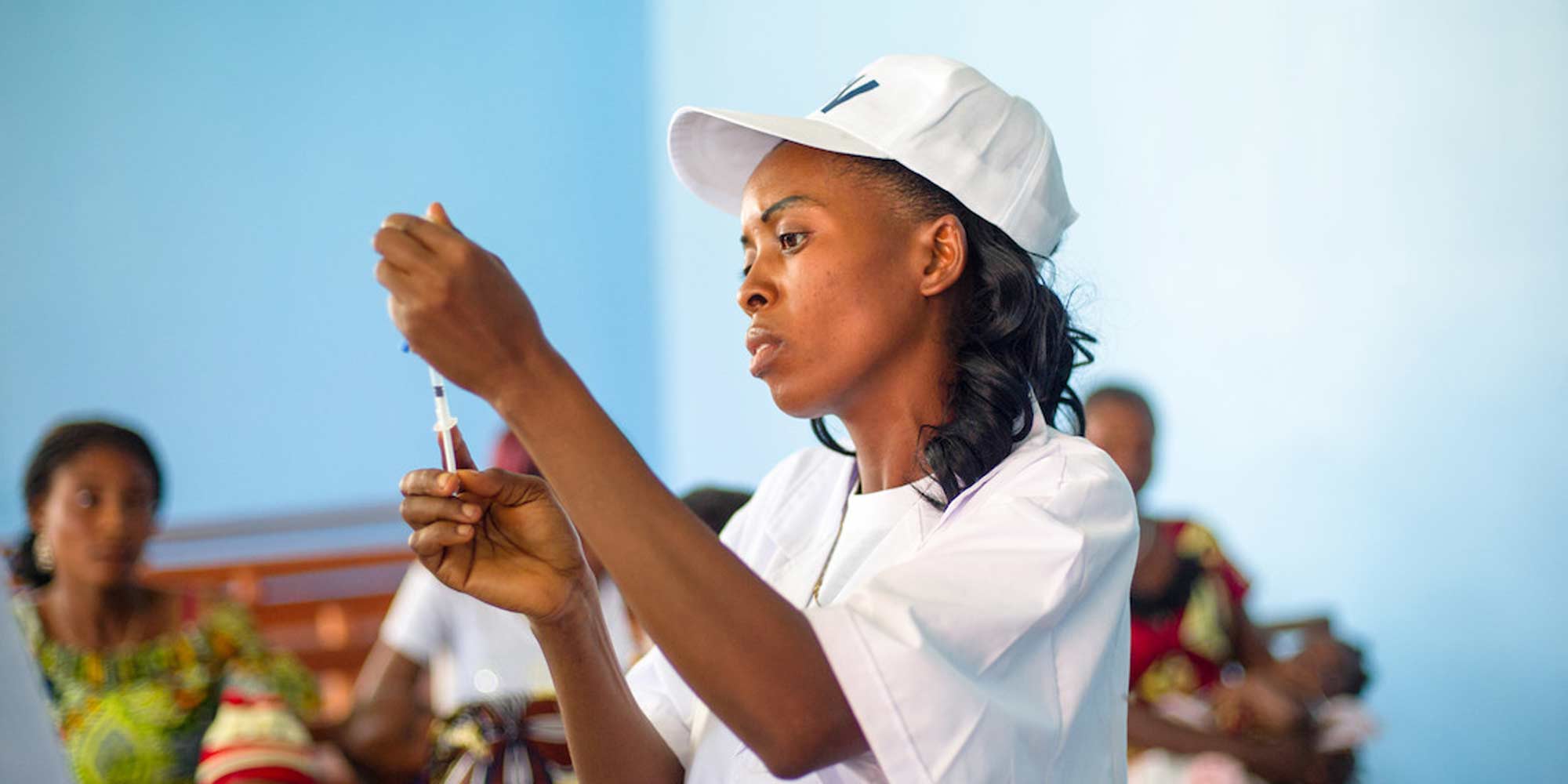 IFFIm has played a critical role with a US$ 191 million investment helping to finance stockpiles of the polio vaccine for outbreaks.

Deep in the heart of Africa, where the once war-torn nations of the Democratic Republic of Congo (DRC) and Rwanda converge, polio may meet its final end.

It is in the DRC cities of Goma and Bukavu, teeming with refugees determined to save their children from war and disease, that Gavi has partnered with UNICEF, WHO, the Bill & Melinda Gates Foundation and others, to eradicate polio once and for all. IFFIm has played a critical role with a US$ 191 million investment that has helped slash incidence of the disease.

“I tell other women in my neighbourhood to vaccinate their children under the age of five,” says Mama Eugenie, a mother of seven who lives on the outskirts of Bukavu. She participated in the first round of a campaign that aims to vaccinate one million children against polio in eastern DRC, and 23 million throughout the nation.

Success of the campaign – DRC has reported more than 100 cases of polio recently – requires comprehensive vaccination in the most remote and inaccessible villages.

A strong and healthy future generation

“This vaccination will help my daughter to grown up strong and healthy,” says Aminata, a young mother in Goma who had her 3-year-old daughter vaccinated last spring. “It seems so simple and amazing.”

In another campaign in the capital of Kinshasa, children had a finger on their left hand stained with ink to show they were vaccinated, leading to a new form of greeting. “Whenever we asked someone on the street if he or she was vaccinated, they showed us their marked finger,” said Barumbu Gentil Mulumba, chief doctor of the Kinshasa Health Zone. “It’s like a secret code.”

Immunisation campaigns also are underway in neighboring countries to help stop cross-border transmission. The importance of this is seen on ferries with thousands of passengers who cross the Congo River that separates Kinshasa and Brazzaville, capital of the similarly named Republic of Congo.

Knowledge of the stockpile investment has played a significant role in sustaining the supply of tOPV needed to maintain eradication and routine immunization activities.

Republic of Congo had more than 500 suspected cases of polio, with more than 200 deaths, following an outbreak centered in the coastal city of Pointe Noire. There, at the A. Cisse Hospital, 24-year-old Tony Boussana has been partially paralyzed by polio. "When I got to the hospital I could still move my arms, but now I can't. I feel completely lost," he says.

The Global Polio Eradication Initiative (GPEI) – a partnership of WHO, UNICEF, the U.S. Centers for Disease Control, Rotary International and national governments – has worked diligently to protect people like Boussana. But when GPEI faced a crisis in 2006, it turned to IFFIm as the only way to finance stockpiling the polio vaccine so suppliers have it available for outbreaks. IFFIm invested US$191.28 million to help develop and license oral polio vaccine (OPV) products that could be field tested for safety and purchased in bulk.

“Lack of a global vaccine stockpile would mean that each country could have decided to establish and maintain its own national stockpile,” notes health care consulting firm HLSP. Pooling resources is significantly better. But no donor could fund such an effort. Except IFFIm. “IFFIm was an ideal fit,” HLSP adds. Gavi now has used 6% of its funds on polio. Suppliers have remained engaged, scaled up production and sparked new entrants.

“Knowledge of the stockpile investment has played a significant role in sustaining the supply of tOPV needed to maintain eradication and routine immunization activities,” HLSP notes, adding that IFFIm funding also was critical to the rapid development and licensure of a new OPV vaccine in 2009. This led to a “striking” 95% decline in cases in Nigeria and India, the elimination of wild poliovirus from all 15 countries re-infected in 2009, and more than an 85% decline in type 3 polio cases globally.