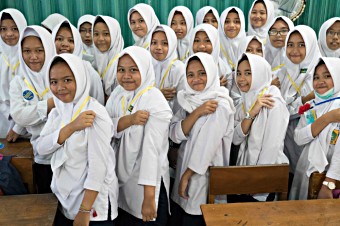 London, 9 April 2019 - The International Finance Facility for Immunisation (IFFIm) today completed a private placement sukuk transaction with the Islamic Development Bank Group (IsDB). The sukuk raised US$ 50 million to accelerate funding for immunisation programmes that save children’s lives in the world’s poorest countries.

The sukuk, a certificate that complies with Islamic financing principles, was issued by IFFIm, with IsDB as the sole investor. The First Abu Dhabi Bank (FAB) acted as placement agent on the transaction.

"The Islamic Development Bank's leadership on this sukuk demonstrates its growing engagement in immunisation programs to reach every child with life-saving vaccines in the world's poorest countries,” said Dr. Seth Berkley, CEO of Gavi. “Gavi is grateful for the IsDB’s involvement in this important innovative financing opportunity, and we look forward to deepening our relationship in the future.”

“IFFIm is excited to work with IsDB to bring a third sukuk to the Islamic capital markets,” said IFFIm Chair Cyrus Ardalan. “The transaction also highlights the shared development goals of the IsDB, IFFIm and Gavi.”

Since its inception in 2000 to the end of 2017, Gavi has helped to immunise more than 288 million children in 33 Organisation of Islamic Cooperation (OIC) member states. Gavi’s financial support to these countries totals more than US$ 6 billion as of 30 September 2018. This represents 50% of Gavi’s overall disbursements worldwide.

“Gavi’s strong impact on saving lives through immunisation is a perfect fit with the IsDB’s strong priority on public health investments,” said Dr. Bandar Hajjar, IsDB President. “That’s why we are very pleased to support IFFIm’s sukuk and extend our relationship with Gavi.”

“First Abu Dhabi Bank congratulates IFFIm on this, the third Vaccine Sukuk issue, and first in private placement format. FAB is honored to have led all three of these deals and to contribute to the very important work that IFFIm and Gavi Alliance undertake in providing vaccinations to children across the developing world. Since its inception, IFFIm has established itself as an innovator in sustainable finance and we applaud IFFIm on this further achievement of using the Islamic capital markets for social good,” said Andy Cairns, Senior Managing Director, Head of Global Corporate Finance at FAB.

This announcement is not an offer of securities for sale, or a solicitation of an offer to buy securities, in the United States or any other jurisdiction where to do so would be unlawful. In particular, the certificates relating to the proposed Sukuk transaction will not be marketed, offered or sold to persons in the Kingdom of Bahrain, and until necessary regulatory clearances are in place in the Kingdom of Saudi Arabia.

A rating is not a recommendation to buy, sell or hold securities, does not address the likelihood or timing of repayment and may be subject to revision, suspension or withdrawal at any time by the assigning rating organisation. Similar ratings for different types of issuers and securities do not necessarily mean the same thing. The significance of each rating should be analysed independently from any other rating.