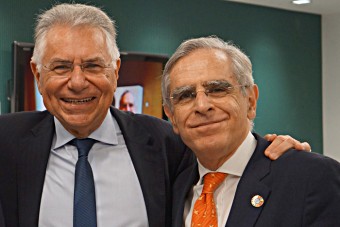 London, 9 January 2018 – The Board of Directors of The International Finance Facility for Immunisation (IFFIm) has selected Cyrus Ardalan, a London-based international investment banking leader, as its new Chair. Mr Ardalan, who began his term as IFFIm Chair on January 1, succeeds René Karsenti, who has served as Chair since 2012.

“I am delighted to have the opportunity to succeed René and to chair the IFFIm board,” said Mr Ardalan. “During his tenure René made an exceptional contribution in leading IFFIm, with its innovative financial structure, to support Gavi, the Vaccine Alliance’s efforts to save the lives of millions of children in some of the poorest countries globally. I look forward to chairing a board that brings together extensive backgrounds in supranational and development finance and continues to build on IFFIm’s work as one of best examples of socially responsible investing.”

“As a member of IFFIm’s Board since 2013, Cyrus has already contributed enormously to IFFIm’s evolution as an exemplary socially responsible investment tool,” said Mr Karsenti. “And with a long career in international investment banking, he offers the right combination of experience, prudence, intellect and compassion that a complex and cutting-edge institution like IFFIm needs to succeed.”

Cyrus Ardalan is the Non-Executive Director and Chairman of Citigroup Global Markets Ltd.  He is also Chairman of OakNorth Bank, as well as Chairman of the Financial Services Advisory Board of Alvarez and Marsal."

"I look forward to chairing a board that brings together extensive backgrounds in supranational and development finance and continues to build on IFFIm’s work as one of best examples of socially responsible investing. "

Cyrus Ardalan, Chair of the IFFIm Board

Previously, he was Vice Chairman of Barclays and head of Public Policy and Government Relations, as well as Vice Chairman of Barclays Capital, where he had a variety of senior roles. Ardalan joined Barclays Capital in 2000 from BNP Paribas, where he held a number of senior positions between 1990 and 2000 in London and New York, including Global Head of Bonds, Global Head of Fixed Income Marketing and Head of BNP Paribas Capital Markets’ activities in North and South America. Previously, Mr. Ardalan was a Managing Director at Chemical Bank and Division Chief of Treasury Operations at the World Bank in Washington.

Mr. Ardalan has previously served as Chairman of the Board of the International Capital Markets Association (ICMA) and as a member of the board of the Dubai International Financial Centre (Dubai's offshore banking facility). A UK national, he is a graduate of University College London and Balliol College University of Oxford.

During his tenure as IFFIm’s Chair Mr. Karsenti, currently President of the International Capital Market Association (ICMA), oversaw seven IFFIm bond issuances which raised a total of US$ 2.5 billion, including two pioneering and award-winning forays into Islamic Sukuk markets.

“Gavi is immensely grateful to René Karsenti for his hard work and sound leadership as Chair of IFFIm, and we’re looking forward to tapping the tremendous store of energy, knowledge and wisdom that Cyrus brings to the role,” said Dr Seth Berkley, CEO of Gavi, the Vaccine Alliance.

“They and many other Board members have made IFFIm a role model for the entire field of global development, which faces constant funding challenges and unpredictability.”

"Gavi is immensely grateful to René Karsenti for his hard work and sound leadership as Chair of IFFIm, and we’re looking forward to tapping the tremendous store of energy, knowledge and wisdom that Cyrus brings to the role."

Since 2006, IFFIm has raised more than US$ 6 billion on bond markets to give Gavi the flexibility to meet immediate needs. To date, Gavi funding in the poorest countries around the world has resulted in the immunisation of close to 640 million children and averted more than 9 million deaths. For example, US$ 90.9 million of funds generated through IFFIm “Vaccine Bonds” went for emergency stockpiles contributing to the inoculation of more than 189 million people against yellow fever, and US$ 139 million of IFFIm funding supported targeted mass measles campaigns that reached an additional 328 million children.

Widely admired in the development finance community, IFFIm was singled out at the Third International Conference on Financing for Development, in 2015 in Addis Ababa, Ethiopia, which urged that it “be replicated to address broader development needs.”

In addition to overseeing Vaccine Bond issuances, Mr Ardalan and the Board will also evaluate the opportunity to extend IFFIm’s future roles to include more directly supporting Gavi’s market shaping activities, Gavi’s Cold Chain Equipment Optimisation Platform and rapid financing in response to disease outbreaks if Gavi decides to play an active role in this space.