Kenya marks the global roll out of pneumococcal vaccine

Kenya marks the global roll out of pneumococcal vaccine 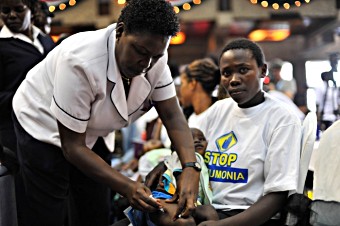 Hundreds of infants in Kenya received their first shots against pneumococcal disease today at a special event to celebrate the global roll out of vaccines targeting the world's biggest child killer -- pneumonia.

Pneumococcal vaccines on their way to more than 40 developing countries

Kenyan mother waits as her child is vaccinated against pneumococcal disease -- one of hundreds of children immunised at a special event marking Kenya's formal introduction of pneumococcal vaccine into its routine immunisation programme. Source: GAVI/2011/Riccardo Gangale.

Nairobi, 14 February 2011 - Hundreds of infants in Kenya received their first shots against pneumococcal disease today at a special event to celebrate the global roll out of vaccines targeting the world's biggest child killer -- pneumonia.

Kenya's President Mwai Kibaki joined parents, health workers, ambassadors and donors in Nairobi to witness children being immunised as part of the Government of Kenya's formal introduction of pneumococcal vaccine in its routine immunisation programme for all children.

"Today's introduction of the pneumococcal vaccine in Kenya is an historic step towards improved health for children in Kenya and in other developing countries," said Kenya's Minister for Public Health and Sanitation, Beth Mugo.

"The global introduction of pneumococcal vaccination is a milestone in global health and will help us reduce child mortality."

"It is the responsibility of GAVI and its partners UNICEF and WHO, to ensure timely access to life-saving existing vaccines. This contribution will also lay the groundwork for the introduction of an affordable new conjugate vaccine in the Expanded Programme of Immunization (EPI) schedule."

One of leading causes of death among young children

Pneumococcal disease currently takes the lives of over a million of people every year - including more than half a million children before their fifth birthday.

Pneumonia is the most common form of serious pneumococcal disease and accounts for 18% of child deaths in developing countries, making it one of the two leading causes of death among young children.

Kenya is the first African country to roll-out this pneumococcal conjugate vaccine which has been specially-tailored to meet the needs of children in developing countries. Nicaragua, Guyana, Yemen and Sierra Leone are also rolling out the vaccine with support from GAVI which brings together governments, UNICEF, WHO and other key players in global health.

GAVI has committed to support the introduction of pneumococcal vaccines in 19 developing countries within a year and, if it gets sufficient funding from its donors, plans to roll them out to more than 40 countries by 2015.

"The roll-out of the pneumococcal vaccine has become a reality across the world allowing developing country governments to reduce deaths and enable millions of children to grow up healthy," said Helen Evans, interim CEO of the GAVI Alliance.

"Routine vaccination is one of the most cost-effective public health investments a government can make and we are counting on our donors to continue their strong backing for our life-saving mission."

GAVI needs an additional US$3.7 billion over the next five years to continue its support for immunisation in the world's poorest countries and introduce new and underused vaccines including the pneumococcal vaccine and the rotavirus vaccine which tackles diarrhoea - the second biggest killer of children under five.

"The pneumococcal vaccine can help us to dramatically reduce the number of children who die from pneumonia, a killer disease that is responsible for millions of deaths globally every year," said UNICEF Executive Director Anthony Lake. "By combining the power of immunisation with other measures like better nutrition and sanitation, we can change - and save - millions of children's lives."

"The rapid roll-out of new-generation pneumococcal vaccines shows how innovation and technology can be harnessed, at affordable prices, to save lives in the developing world. The payback, as measured by reduced childhood mortality, will be enormous," said Dr Margaret Chan, Director-General of the World Health Organization.

The roll out of these pneumococcal vaccines in the developing world has been made possible through an innovative finance mechanism pioneered by GAVI called the Advance Market Commitment (AMC).

With US$ 1.5 billion from Italy, the United Kingdom, Canada, the Russian Federation, Norway, and the Bill & Melinda Gates Foundation and a commitment of US$ 1.3 billion from GAVI, the AMC allowed the acceleration of production capacity from the two manufacturers contracted so far. This is securing the supply of pneumococcal vaccines within a year following the introduction of those vaccines in Europe and in the United States and at a fraction of the price charged in rich countries.

"The Advance Market Commitment accelerated the introduction of the pneumococcal vaccine in the poorest countries of the world," said Dr Tachi Yamada, President of the Global Health Program at the Bill & Melinda Gates Foundation.

"This innovative finance mechanism is proof that public-private relationships are working to deliver life-saving vaccines to children as quickly as possible."

"As one of the biggest supporters to the GAVI Alliance, the United Kingdom is at the forefront of international efforts to protect children from preventable diseases. Today's launch is an important step forward in the fight to reduce child mortality and protect the world's poorest children," said Secretary of State for International Development, Andrew Mitchell.

"I am fully committed to working with our international partners to ensure that GAVI's valuable work continues to receive the support it deserves and look forward to hosting GAVI's next pledging conference in London in June," he added.