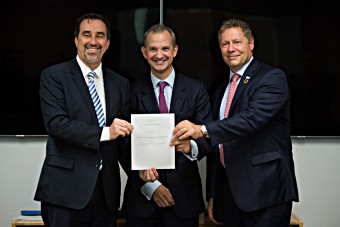 During this year's United Nations General Assembly in New York, Brazil’s Minister of Health, Gilberto Occhi, Dr. Seth Berkley, CEO of Gavi, and Christopher Egerton-Warburton, a member of the IFFIm Board of Directors, met to discuss the Brazil's US$ 20 million commitment to IFFIm. Credit: Gavi/2018/Andrew Seng.

London – 11 October 2018 – The Government of Brazil formally approved today a grant of US$ 20 million to the International Finance Facility for Immunisation, or IFFIm, which will accelerate the availability of funding for immunisation programmes supported by Gavi, the Vaccine Alliance. Brazil’s commitment of $1 million per year for 20 years makes it the 10th donor to IFFIm overall and the second BRICS donor after South Africa.

The approval today follows a meeting at the time of the annual United Nations General Assembly in New York City last month, when Brazil’s Minister of Health, Gilberto Occhi, Dr. Seth Berkley, CEO of Gavi, and Christopher Egerton-Warburton, a member of the IFFIm Board of Directors, met to discuss the country’s commitment.

“Brazil’s grant is important not only because it will provide additional funding for immunisation in the poorest countries,” said Cyrus Ardalan, Chair of IFFIm’s Board of Directors. “It also sends a powerful message that Brazil can play a leading role in efforts to solve some of the biggest public health challenges around the globe.”

“The partnership with Gavi is strategic due to its decentralised pursuit of technology development and inputs manufacturing, as well as for Gavi’s vision to guarantee expanded access to vaccines,” said Minister Occhi. “This agenda contributes to the sustainability of health systems around the world. Brazil also seeks to contribute by strengthening its vaccines industrial complex to expand global capacity in dealing with health emergencies.”

Brazil has a longstanding commitment to ensuring access to medicines and vaccines at the domestic, regional and international levels. The Ministry of Health has prioritised the promotion of Brazil’s science and technology complex and its engagement in international health issues. Brazil’s state-owned vaccine manufacturer, Bio-Manguinhos, is one of the only four global yellow fever vaccine suppliers and has provided the vaccine to Gavi.

“We’re immensely pleased that the Brazilian Government and people have joined nine other countries to help IFFIm continue its engagement of private sector investors in support of critical immunisation programmes,” said Dr. Berkley. “Brazil’s announcement strengthens Gavi’s capacity to marshal all available resources. That means many more children around the world will get the vaccines they need to survive and thrive.”

IFFIm, one of the world’s leading socially responsible investment mechanisms, is a pioneering global development finance tool launched by Gavi. Based on grants from donor governments like Brazil, IFFIm sells bonds on the capital markets and makes funds immediately available for immunisation programmes in developing countries. Since 2006, IFFIm has disbursed more than US$ 2.5 billion that Gavi has used to introduce and maintain routine vaccination programmes in the world’s 73 poorest countries. IFFIm’s innovative frontloading mechanism has made it possible for more than 80 million children to be vaccinated ahead of receiving the donors’ grants.