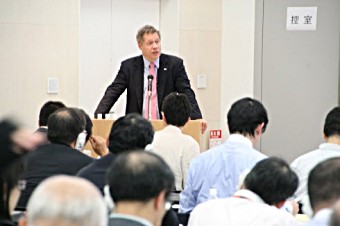 GAVI’s success in partnering with the private sector highlighted at a global health symposium of Japanese companies in Tokyo.

Programmes in public-private partnership, such as IFFIm, held up as models for Japanese corporate sector

Tokyo, 11 October 2012 – GAVI’s success in partnering with the private sector was highlighted at a global health symposium of Japanese companies in Tokyo today, supported by the Japanese Ministry of Foreign Affairs.

Companies can “make a reasonable profit and help people at the same time,” said Shiro Konuma, director of the Global Health Policy Division within the Japanese Ministry of Foreign Affairs.

“Governments always must keep in mind the raison d’etre of private companies. That is the starting point. But we all share the responsibility to help save lives.”

Japan recently made its second direct donation to GAVI, and the Japanese public has been responsible for about a quarter of GAVI’s funding through Japan’s uridashi bond market, noted GAVI CEO Seth Berkley, a featured speaker alongside those from the Health & Global Policy Institite (HGPI) think tank, and a panel discussion with five Japanese companies and UNICEF.

Among them was Daiwa Securities, which helped introduce “vaccine bonds” in Japan to benefit GAVI through IFFIm, the International Finance Facility for Immunisation. IFFIm overall has raised US$ 3.7 billion through bonds backed by the pledges of nine donor governments, funding about half of GAVI’s programmes, Berkley notes. And about US$ 2 billion of it has come from Japanese investors.

IFFIm was consistently cited by the panel as an example of good business that has benefited public health. It “seems like water and oil, but IFFIm is the link,” said Satoru Yamamoto, director/head of International Investors Services at Daiwa. Underwriters like Daiwa can expand and market their business to Japanese investors, who secure both a financial and a social return.

GAVI also works closely with pharmaceutical suppliers through its Advance Market Commitment initiative to help make the pneumococcal vaccine affordable to developing countries. This was one of several examples cited by the panel of how suppliers are profitably expanding their business while also promoting public health.

He cited expanded U.S. liability protection of suppliers that led to a “second golden age” of new vaccines (after those against smallpox and polio), including three supported by GAVI: pneumococcal, rotavirus and HPV vaccines. “The impact is incalculable.”

But time and again, participants returned to the view that good public-private partnerships must mean good business. “If we want to grow, it will be in the developing world” by providing them with affordable medicines, vaccines and technologies, said Dr. BT Slingsby, director of Global Access Strategies at Eisai, a Japan-based pharmaceutical company.

Case studies offered at the symposium by Esai, Daiwa, medical imaging/camera company Fujifilm and food/chemical company Ajinomoto “shows what the private sector can do with a job that used to be done by the government,” said keynote speaker Kiyoshi Kurokawa, chairman of the Health & Global Policy Institute (HGPI), a Tokyo-based think tank and co-sponsor of the symposium, attended by about 135 people.

GAVI, for example, now is working with corporate partners through the GAVI Matching Fund to “bring their tools to this very important mission,” Berkley said. This could help solve obstacles to immunisation, such as the need to monitor vaccine supplies and keep them in cold storage in remote areas, Berkley.

“You might ask, ‘Why should the private sector engage in this discussion?” Berkley concluded. “Healthy people mean healthy markets. These are places that are likely to see growth in the future and become partners in this very shared earth.”