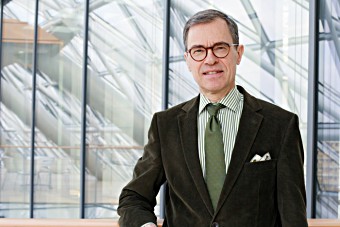 London, 4 June 2018 – Bertrand de Mazières, Director General for Finance at the European Investment Bank, joined the Board of Directors of The International Finance Facility for Immunisation (IFFIm), effective May 18, 2018.

“I have enormous admiration for the role IFFIm has played helping Gavi, the Vaccine Alliance immunise children in low-income countries around the world,” said Mr de Mazières, who will join the Board as of today. “That’s why I’m excited about working with the rest of the Board and the Secretariat as they continue IFFIm’s lifesaving mission for years to come.”

Based in Luxembourg, Mr de Mazières is currently the chief financial officer of the biggest multilateral bank and largest long term lender in Europe, with responsibility for funding, treasury, support functions (back and middle office) and ALM, and managing a staff of 180.

A French national, Mr de Mazières has been involved since 1982 in public administration, financial market regulatory authorities and International Financial Institutions. In close and continuous interaction with banks, capital market enterprises, ministries of finance, central banks and regulatory supervisors, he has alternated operational functions with supervisory and regulatory responsibilities, all concerned by and contributing to the development of capital markets at the service of the public, and especially to the EU financial integration. His experience also includes the set-up and management of newly created operations.

“Bertrand de Mazières is one of the most experienced and respected leaders in international finance today,” said Cyrus Ardalan, the Chair of IFFIm’s Board. “His presence on the Board will enable IFFIm to continue as a leading innovative development finance institution, one that that has pioneered socially responsible investing and given millions of children access to vaccines.”

“Since its beginning in 2006, IFFIm has been an indispensable mechanism for accelerating funding for vaccines in countries that could otherwise not afford them,” said Dr. Seth Berkley, CEO of Gavi, the Vaccine Alliance, which IFFIm supports. “That success would not be possible without the wise and experienced Board members who have guided IFFIm throughout its history. We’re grateful to Mr de Mazières for bringing his talents and experience to IFFIm, and look forward to collaborating with him.”

"We’re grateful to Mr de Mazières for bringing his talents and experience to IFFIm, and look forward to collaborating with him."  Dr Seth Berkley, Gavi CEO

Since 2006, IFFIm has raised more than US$ 6 billion on bond markets to give Gavi the flexibility to meet immediate needs. To date, Gavi funding in the poorest countries around the world has resulted in the immunisation of close to 640 million children and averted more than 9 million deaths. For example, US$ 90.9 million of funds generated through IFFIm “Vaccine Bonds” went for emergency stockpiles contributing to the inoculation of more than 189 million people against yellow fever, and US$ 139 million of IFFIm funding supported targeted mass measles campaigns that reached an additional 328 million children.

Widely admired in the development finance community, IFFIm was singled out at the Third International Conference on Financing for Development, in 2015 in Addis Ababa, Ethiopia, which urged that it “be replicated to address broader development needs.”

In addition to overseeing Vaccine Bond issuances, the Board is also evaluating the opportunity to extend IFFIm’s future roles to include more directly supporting Gavi’s market shaping activities, Gavi’s Cold Chain Equipment Optimisation Platform and rapid financing in response to disease outbreaks if Gavi decides to play an active role in this space.