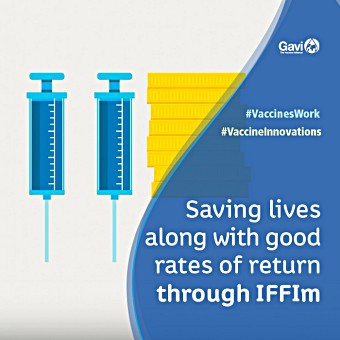 Since 2006, IFFIm has contributed US$ 2.6 billion to Gavi’s immunisation programmes and had a catalytic effect on increasing uptake of underused vaccines in the poorest countries.

Making sure that vaccines reach as many children as possible around the world requires a healthy dose of innovation. During World Immunization Week 2019, IFFIm and Gavi are showcasing how innovative financing furthers Gavi’s mission to create equal access to new and underused vaccines for children living in the world’s poorest countries.

IFFIm’s funding plays a critical role in immunisation. A recent analysis shows how, over a decade, IFFIm’s frontloading mechanism in support of routine immunisation has allowed more than 80 million children to be vaccinated ahead of receiving donors’ grants.

In 2008, IFFIm disbursed more than US$ 6 million to help stabilise Nepal’s health administration. Then, in April 2015, Nepal was devastated by an earthquake. But because the country’s health system was relatively strong — due in part to IFFIm funding — the country managed to resume regular immunisation services within days.

IFFIm has also played a prominent role in one of Gavi’s core and most successful functions: negotiating significantly lower vaccine costs for the world’s poorest countries. With funds provided by IFFIm, Gavi has had a catalytic effect on increasing uptake of underused vaccines in the poorest countries. For example, by funding more than 90% of initial vaccines for Gavi’s pentavalent programme, IFFIm’s investment encouraged manufactures to increase production and decrease the price. Gavi is now able to procure pentavalent vaccines for US$ 0.88 per dose, a price reduction of more than 75% since 2006.

IFFIm has provided more than US$ 27 million for pentavalent in Uganda, making it one of the first Gavi-supported countries to deliver the vaccine to its children. Hib was virtually eliminated in just five years, preventing 30,000 cases of severe Hib disease and 5,000 child deaths every year.

IFFIm also made a significant contribution to Gavi’s mission to eradicate polio, investing more than US$ 191 million to help develop and license oral polio vaccine (OPV) products. IFFIm’s support contributed to a striking 95% decline in polio cases in Nigeria and India, the elimination of wild poliovirus from all 15 countries reinfected in 2009 and an 85% decline in type 3 polio cases globally.

In June 2018, Gavi approved an exceptional extension of overall support for Nigeria up to 2028 including funding for inactivated polio vaccine (IPV) for the next two years. IFFIm may play a role in financing this extension initiative.

As the world celebrates progress made by immunisation programmes and looks to challenges of the future, IFFIm will continue innovating ways to support and fund life-saving vaccines and strengthen health systems.