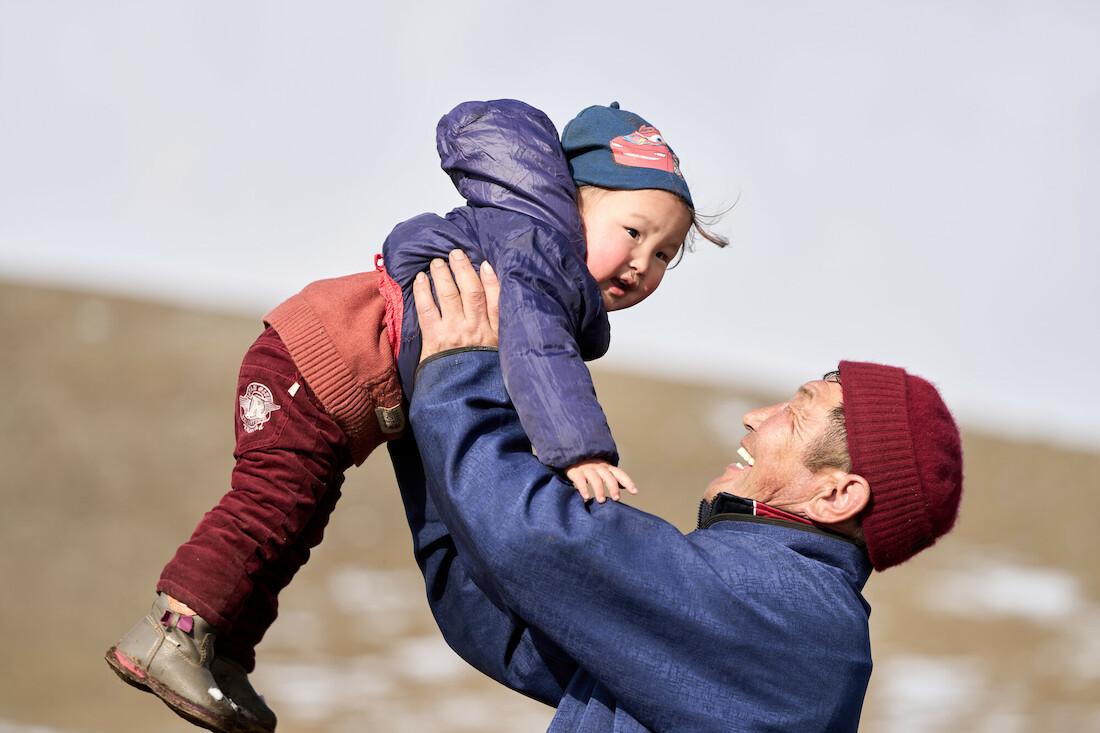 Buyanjargal and his granddaughter Anar at home in Mongolia. During the country’s lockdown, some herder families have been separated from the children they send to school. Credit: Gavi/2021/Khasar Sandag

Camel riders traverse Northern Kenya to spread the word about COVID-19 vaccines. Planes bearing half a million vaccines touch down in Manila. Mongolian villagers gather in a health centre waiting room in Batsumber. Around the world, millions of doses of COVID-19 vaccines have begun arriving through the COVAX Facility in the largest and most rapid global vaccination rollout the world has ever seen. And now, vaccinations are underway in 135 countries with over 100 million doses delivered so far.

When COVID-19 began to spread worldwide, the possibility that a vaccine against this deadly new virus would be developed and accessible – particularly outside wealthy, influential countries – seemed remote. In February 2021, Ghana became the first country to receive vaccines shipped and delivered by COVAX. By July, 135 economies had received shipments of this precious commodity — more than 100 million COVID-19 vaccines — and the number is growing by the week. Although COVAX has faced unforeseeable supply bottlenecks since then, it is on track to deliver more than 1.8 billion doses to lower-income countries by early 2022.

In March, Kenya received just over one million doses as part of the COVAX Facility. It was the first shipment of the country’s allocated 3.56 million doses. To assuage vaccine hesitancy, camel riders in Northern Kenya have been using their herds to bring traditional healers to communities to spread the word about COVID-19 vaccines, gaining trust and paving the way for vaccines that are starting to arrive.

COVAX has shipped more than five million doses of COVID-19 vaccines to the Philippines since March, and more than eight million Filipinos have already received at least one dose.

And in the Mongolian steppes, nomadic livestock herders hope that loneliness of the pandemic era will soon come to an end as COVAX vaccines become available. More than 90,000 vaccines were shipped in March 2021.

These hopeful scenes from daily life around the world illustrate COVAX at work. IFFIm funding has played an important role in getting COVAX off the ground. But for this mammoth effort, success also depends on how quickly vaccine supplies can turn around from a current shortage. At a time when the virus continues to spread, there are not enough vaccines to go around.

The Gavi COVAX Advance Market Commitment (AMC) has raised, as of mid-June, nearly US$ 9.7  billion. With these assured resources, COVAX has established the buying power to negotiate with manufacturers to supply doses at favourable prices.

IFFIm has added to this surge funding, strengthening the COVAX AMC’s hand as it buys COVID-19 vaccines from manufacturers. IFFIm has been a vehicle of choice for some sovereign donors to accelerate funding for the COVAX AMC. To date, Australia, Norway, Spain, Sweden and the United Kingdom have pledged an additional US$ 1.2 billion in long-term funding to the AMC through IFFIm.

Through recent sales of vaccine bonds, IFFIm has generated US$ 780 million in cash proceeds for Gavi to apply to the COVAX AMC, with other proceeds available for Gavi’s core immunisation programmes. And there’s more to leverage from the new donor pledges.

Reaching the most vulnerable

While COVAX has raised significant funding and distribution has begun, significant hurdles remain as COVAX aims to deliver 1.8 billion doses to people in 92 lower-income countries by early next year. That would be enough to protect at least 30% of people in 91 of these countries, plus a large swath of the population of India.

Yet, at the moment, many countries are still waiting for enough doses to reach 20% of their population – frontline health workers and the most vulnerable – which COVAX aims to immunise first. Overall, the global supply of vaccines has lagged. The shortage affects low- and middle-income countries the most. More than a third of people in high-income economies are now vaccinated compared to less than 1% of people in low-income economies who have had their first jab.

“COVAX hasn’t been immune to the global supply shortage and disruptions; ours have been magnified by the devastating second wave in India, meaning doses have been reallocated for domestic use,” said Dr Seth Berkley, CEO of Gavi, in a recent op-ed.

To address the pandemic in low- and middle-income countries, COVAX needs as many doses as possible, as soon as possible. Gavi and COVAX are calling on countries that have doses to share to donate them.

With new variants emerging, countries are under increasing pressure to secure enough vaccines to protect everyone. “During a pandemic, timing really is everything, especially when you are in the midst of the largest and most complex vaccine deployment in history,” said Dr Berkley.

In order to help prepare countries for a rapid scale up, the Gavi Board has allocated new funding of US$ 775 million to support the delivery of COVAX-funded doses in lower-income economies and humanitarian zones over the next two years.

As a crucial part of Gavi’s financial structure, IFFIm can help accelerate access to vaccines for vulnerable people. As COVAX speeds production and delivery for this urgent mission, IFFIm’s efficiency and effectiveness can bring future funding forward in time and, with the power of flexible financing, contribute to bringing an end to the global pandemic.

Visit Gavi.org to find current news and updates on the COVAX vaccine rollout.