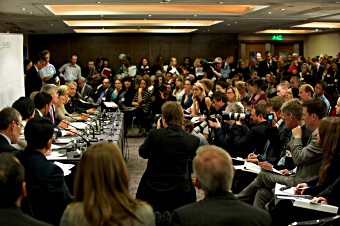 Italy and Brazil have pledged US$ 37 million and US$ 20 million respectively to IFFIm to support GAVI's vaccination programmes.

The funds IFFIm generates from the Italian and Brazilian pledges will be used by GAVI to purchase and deliver vaccines and strengthen health services in developing countries.

The two new commitments represent a strong statement of support for IFFIm. The pledges raise total contributions to IFFIm to US$ 6.3 billion over 23 years. The pledges break down as follows:

“These nations are showing strong leadership by driving the global health agenda forward,” said Alan Gillespie, Chair of the IFFIm Board of Directors.

Support from other donors

Other donor nations also expressed strong support for IFFIm at the GAVI pledging conference. The UK, for instance, pledged US$ 1.34 billion to GAVI and is exploring channelling a small proportion of its new pledge through IFFIm.

The UK Department for International Development noted that IFFIm is an extremely efficient and cost-effective mechanism that has a strong role to play in GAVI's future.

“GAVI has been a force for innovation with IFFIm, cost-effectively delivering additional funding for immunisation,” said Gunilla Carlsson, Sweden’s Minister for International Development Cooperation in its Ministry for Foreign Affairs. Sweden has pledged US$ 38 million to IFFIm over 15 years.

“We believe in innovative finance, and we believe in more creative ideas,” said José Luis Solano Gadea, Spain’s ambassador at large for Public-Private Partnership in its Global Health Ministry of Foreign Affairs and Cooperation. Spain has pledged US$ 240 million to be paid over a 20-year period.

“Fiscal sustainability of vaccines is crucial to the future success of GAVI,” said Ngozi Okonjo-Iweala, a managing director of the World Bank, which acts as financial adviser and treasury manager to IFFIm.

“We are happy to support GAVI in its innovative finance work.”

Italy and Brazil have pledged a combined total of US$ 57 million to an innovative financing initiative that converts the long-term pledges into immediate funds for children's vaccination programmes.

The pledges were part of yesterday's unprecedented pledging conference by the GAVI Alliance, which raised US$ 4.3 billion overall.

The GAVI Alliance will use funds generated from the Italian and Brazilian pledges to purchase and deliver vaccines and strengthen health services in developing countries.