Routine immunisation programmes supported by Gavi, with IFFIm funding, have an impact that’s anything but ordinary.

Routine immunisation programmes supported by Gavi, with IFFIm funding, have an impact that’s anything but ordinary

Côte d’Ivoire recognised Gavi’s contribution to improving the health of the nation’s children by presenting medals to both Gavi Board Chair Dr Ngozi Okonjo-Iweala and its CEO Dr Seth Berkley. The special ceremony took place in Abidjan, where Côte d’Ivoire hosted the Gavi Board meeting. Credit: Gavi/2016/Mahmed Keita.

Côte d’Ivoire, a nation known for ethnic diversity and a strong economy, has endured civil war off and on since 2002. But the most recent conflict in 2011, although brief, left the country reeling. Dr Raymonde Goudou Coffie, Minister for Health and Public Hygiene, told Gavi: “As you can imagine, after the crisis our country experienced, if there was one sector that was the most affected by degraded infrastructure it was the health system.”

This had an immediate impact on routine immunisation. Coverage rates plummeted from 85% in 2010 to just 62% in 2011, leaving thousands of children vulnerable to deadly diseases.

Answering the crisis, Gavi waived some of its usual support requirements and introduced pneumococcal and rotavirus vaccines in 2014. These combat the two biggest childhood killers - pneumonia and diarrhoea. In addition, Gavi continued to scale up distribution of pentavalent vaccines that were first introduced in 2008.

In 2015, with Gavi funding, the country completed a demonstration project for human papillomavirus (HPV) vaccine, which prevents cervical cancer. The demo achieved 98% coverage rates, paving the way for a nationwide introduction of this life-saving vaccine in the coming years.

By focusing on routine immunisation, the country rapidly improved its coverage rates, which are back to their pre-war levels. Today, 83% of children are protected by pentavalent, and pneumococcal coverage is at 72%.

Côte d’Ivoire still has work to do - ensuring vaccines reach even the hardest-to-reach communities, data quality issues, and the hardest challenge: convincing parents to vaccinate their children. Health workers in communities are there to educate hesitant parents, and they’re making progress.

Nina Seka gave birth to her baby Tania in 2016. “Word on the street was that needles made the children tired, it made the children sick. That is why I hesitated a little. But I became more aware and now it’s me who wants the vaccinations!”

IFFIm is exploring ways to support Gavi’s Cold Chain Equipment Optimisation Platform (CCEOP), which brings facilities like the one in Côte d’Ivoire to more countries. 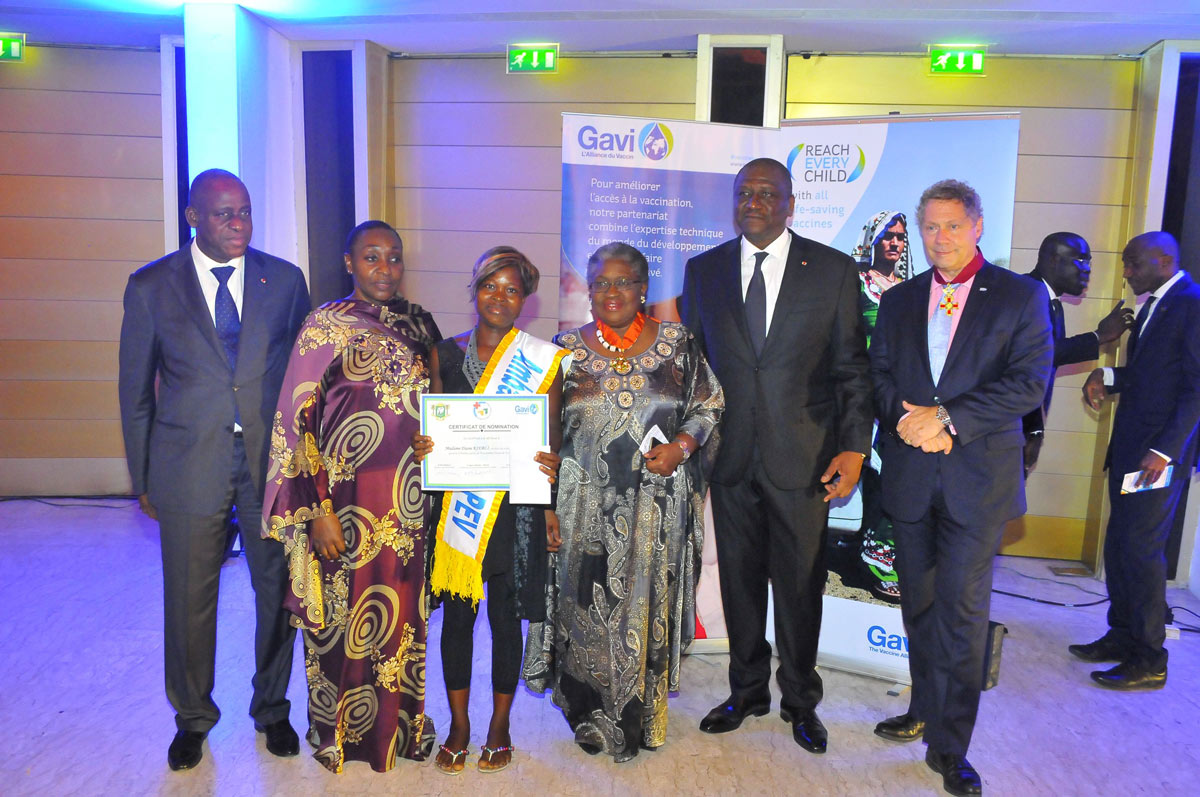 Côte d’Ivoire recognised Gavi’s contribution to improving the health of the nation’s children by presenting medals to both Gavi Board Chair Dr Ngozi Okonjo-Iweala and its CEO Dr Seth Berkley. The special ceremony took place in Abidjan, where Côte d’Ivoire hosted the Gavi Board meeting. Credit: Gavi/2016/Mahmed Keita.